Data analysis: In the past five years, which brands of heavy soldiers have laid out soft outfitting exhibitions? 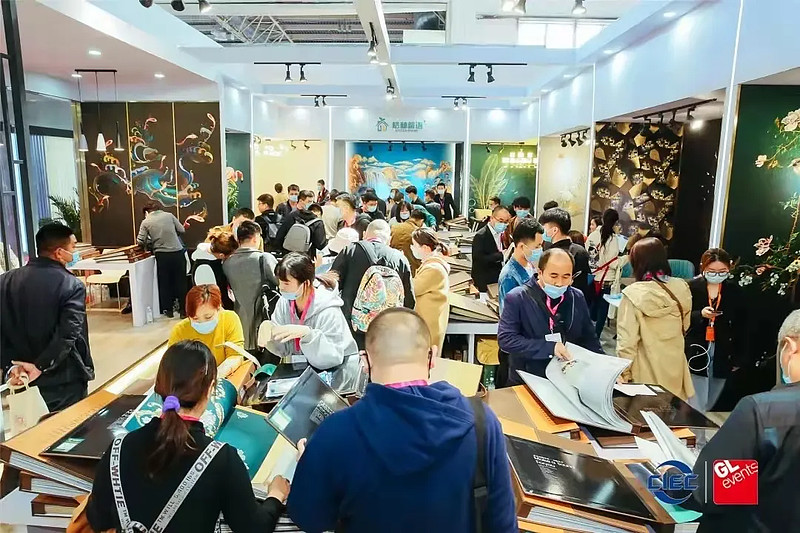 In the past five years, China (Beijing) International Wallpaper Wall Curtain and Home Furnishing Soft Decoration Exhibition has basically maintained around 1500-2,000 companies. Most companies in the industry can be present.

The phenomenon worthy of attention is,

Another brand participated in the two major exhibitions of Beijing and Shanghai at the same time, fully tap the value value of the exhibition.

In this article, we use the Beijing Softfights Exhibition as the main observation object to see who has long -term investment in key resources and deeply excavating the value of soft outfitting exhibitions. Provide reference for more soft installation companies.

The emphasis on the exhibition has been in the home industry for many years, and the soft -file companies are no exception. Some companies have participated in various exhibitions 10 years ago.

But in recent years, a new change has appeared, that is

Resource concentration towards the head exhibition

Regardless of the specifications and quantities of exhibitors, or the traffic of professional audiences, they are gathered to a minority core exhibition.

In the large -scale soft -loading sector, there are very few professional exhibitions that can be selected by enterprises, mainly

The exhibition has lasted for more than 30 sessions. It is a one -year double exhibition mode. It is held in Beijing in spring (referred to as: Beijing Soft Installation Exhibition). Become the vane of the large soft -decorated industry, and its right to speak and cohesion can be said to be right.

Although affected by the epidemic in 2021, the attraction did not significantly decline. About 1,500 companies settled in. In 4 days, the audience had more than 100,000.

In the open channels, some brands have clearly mentioned the time to participate in the Beijing Soft Formation Show. For example, Berkley has not been absent since the first Beijing Soft Installation Exhibition in 2008, and believes that it is an investment in wallpaper wall cloth soft furnishings. It is of great significance.

Focusing on the actions of soft outfit exhibitions, there are generally five mainstream phenomena:

1. At the end of the Beijing or Shanghai soft outfit exhibition, the exhibitors have a beautiful record. The obvious law is that most of these outstanding results are long -term exhibitors.

2. Long -term exhibitors have generally established a relatively mature exhibition mode, such as the theme of the listing of new products; or accustomed to publishing a new strategy and new model at the soft outfit show;

3. The integrated marketing of the exhibition has improved. It is no longer limited to the exhibition site. At the same time, the online and offline communication resources are mobilized. Participating value.

4. The area of ​​the exhibition hall is generally larger, mostly more than 300 square meters, and even about 500 square meters. It is used to display brand strength, but more importantly, to fully display the products of Chen, and create scenes in the form of home space. Experience.

5. From the rich display of the product to the layout of sceneization and planning. Five years ago, enterprises were accustomed to the display of a large number of new products and heavy products; in the past five years, more companies were willing to use a high -value soft outfit space to highlight key products through the practice of scenario and planning.

We take the Beijing soft outfit exhibition as the main object,

I chose more than ten exhibitors

In the past five years, the exhibition layout is combed. These protagonists include:

It took a long time to participate in the exhibition. In 2015, he organized a very creative exhibition hall art show. The staff appeared with the mysterious image of “black gauze mask and black clothes”, which became the topic of the exhibition.

After that, I innovated all the way, and once again performed well in 2021. I moved the store into the exhibition hall. The design of the specialty store was restored at 1: 1, and the three major scenes of the three major scenes of the installation company experience store, shopping mall drainage store, and channel expansion store were launched. Space attracts the audience.

At the same time, Misu’s on -site strategy has a highlight. The launch of the “sending flow” and “sending the metropolis car” activity policies, which is quite eye -catching in their peers. This live creative strategy has become a major highlight of Mi Su.

In 2018, it focused on the promotion of the Woven Rounds Network and the 106cm wide gilt deep -crushing series products. In 2019, the war report was exposed. Nearly 500 stores signed a contract, with a turnover of more than 3 million.

By 2021, Ai was developed into a relatively mature multi -category soft -file enterprise. The main push of walls, curtains, wallpaper, wall -click, leather carving, etc. After the Beijing exhibition was over, it was mentioned that 331 stores were signed.

In the exhibition and promotion, a new handwriting, such as organizing the live broadcast of “Three Women and One Play”, at the same time ushered in the visiting group of the China Building Materials Market Association’s Bidding Procurement Branch, and the bidding and procurement of the project.

At the Beijing soft outfit exhibition in recent years, I often see it

The brand attaches great importance to the brand, and has new strategies every year, and the popularity is relatively high.

As early as 2015, he took the April Wallpaper, Meiqi Wallpaper, and Noviqi Wallpaper at the same time. In 2019, Yazi Nuo made a new trick to cater to the “integrated soft installation space” in the hardcover era to promote the overall soft furnishings.

By 2021, the exhibition hall is re -engraved with Spaxe super space, and the full -series products such as wallpaper, wall cloth, wall -click, and curtains are integrated to provide a planned experience.

As a sub -brand created in 2018, the new space cloth industry,

Both the soft outfit exhibitions in Beijing and Shanghai were unveiled. Among them, in 2019, the theme exhibition hall of the “Dream of Dreams” appeared at the Beijing Exhibition. The public information pushed at the time mentioned that the investment promotion was greatly successful.

By 2021, Modern Beasts appeared again in the Beijing Exhibition and began cross -border product design, such as:

With the World Natural Foundation (WWF)) Guardian Snow Leopard Project Commemorative Memorial “Unbending Realm”, part of the revenue will be donated to the foundation;

Finally, the performance of 152 new stores was exposed through Guan Wei.

Whether it is the Shanghai Exhibition or the Beijing Exhibition,

They all attached great importance to it. The first time to participate in the Beijing exhibition should be in 2011. At that time, the seamless embroidery wall cloth that was exclusively developed, and the three embroidery books attracted widespread attention.

The progress is endless. In 2021, the collar embroidery launched a new brand, and opened more than 400 stores in more than a year, covering major cities.

At this Beijing exhibition, Lingxiu launched new category curtains. The wall painting and curtains were combined with soft furnishings. The exhibitors they had exposed were quite beautiful. As of April 1, Lingxiu had signed 107 dealers.

They are participating vigorously, and each time has wonderful highlights. For example, in 2017, the Magnolia Group proposed a soft outfit integration. With wallpaper as the core, a series of overall home support products, including cloth fabrics, curtains, pillows, decorative hanging hanging hanging Painting, carpets, furniture, etc. to achieve the layout of soft furnishings.

In 2018, Magnolia Space once again interpreted the iterative results of the integration of soft furnishings.

In 2019, Magnolia broke the traditional display space layout, adopted the theme exhibition presentation model of container, and focused on expressing new Chinese style, fairy tale world, modern light luxury and other styles. At this year’s Beijing Exhibition, the “2018 Chinese Wallpaper and Wall Club Industry White Paper” was released. Magnolia Home was one of the participating units.

By 2021, Magnolia Home Furnishing will continue to invest in heavyweight resources to participate in the Beijing Soft Formation Exhibition. Different soft -file products developed for many years will be displayed in a combined and innovative manner.

With more than 2000 materials, 18 sets of scenarios are set up, which not only focuses on the product’s antiviral, waterproof, pollution -proof, antibacterial and other functions, and at the same time realize soft installation space design.

In the 2019 Beijing exhibition, it took more than 300 square meters of exhibition halls, and it landed in more than 20 scenes. It also presented a version 2.0 version of the specialty store, released a series of new products such as natural, new Chinese, light luxury, and cartoons.

At that time, Ke Luoya invited Jiang Yiyan to endorse and landed on the Nasdaq on the New York Times Square during the Spring Festival to enhance the brand awareness.

In 2021, the Walla Wall Cloth and the curtains were fused with the curtains. At the exhibition, “Wall Cloths and Curtains, Finding Koroya” ads, attracting much attention, and showing a pretty exhibitors. , A total of 123 contracts.

The emphasis on the Beijing Exhibition is no less than the same as possible. During the exhibition in recent years, the company will continue to announce the scene of the scene through official micro -consecutive announcements. In 2019, the dealer admired the brand at the exhibition site.

In the Beijing Exhibition in 2021, the butterfly embroidered main -pushed wall cloth finished curtain integrated plan, and issued a powerful investment promotion policy, and signed 86 partners during the period.

It is quite enthusiastic about the Beijing Softfights Exhibition and participated many times. The main line of participation is to push new products.

For example, in 2017, “Colorful Colorful mural wall cloth” was released. Choose high -end wall cloth such as silk, linen, and jets to integrate with mural decoration. At the same time, the “Arts and Hard Bags”, mainly flower, birds, Chinese style, freehand style; there are also European and new Chinese styles of “Oil Painting”.

By 2021, the Beatles mainly pushed the new master series of high -end murals at the exhibition, and used hand -painted manuscripts of painting masters to win a lot of praise.

Participating in the public information of the North Exhibition can be traced back to a few years ago, and each exhibition will be exposed to heavyweight products.

For example, in 2015, Bon Hagen, the chief design director of Top Li, came to the scene and launched a series of products such as three -dimensional space, Vermel, Corro.

The subject matter in 2018 is still mainly new products, including Venus, PA, PV, Impression and other wallpaper wall cloth versions. At the same time, the “Liang You” new Chinese -style works are launched after the “Liang”. This series is well -known new Chinese designer Liang Jianguo’s creativity.

At the exhibition in 2021, Tepeli participated in the release of the “2021 Chinese Wall Decoration White Paper”. At the same time, the main original products were promoted.

The exhibition has been exhibited. At that time, it was mainly wallpapers and fabrics, and then maintained a investment in Beijing exhibition. By 2018, Sophlo took the brand of Germany, Belgium, Britain, Italy and other countries. The category has included wallpapers, wall cloths, fabrics, etc.

It is also a frequent visitor to the Beijing exhibition. Taking 2019 as an example, the company’s core category was seamless wall cloth, and the new products covered the flowers, embroidery, ink prints, and landscape solo embroidery.

The version of the appreciation area has added a new brand “cloth wall cloth”, with the concept of fashion and youth, mainly the main plain color simple style, Han Minghai, chairman of the new Silk Road cloth industry, appeared to help out.

By 2021, the new Silk Road Baiyu launched the “Colorful Silk Road” series of wall cloth to attract customers with the help of new products.

In addition, there are companies such as Denino, Yafi Wall Club, cloth world, Tianyang, Grammy, poetry and painting Jiangnan, ruby ​​and other companies. In the past five years, they have participated in soft outfit.

Enterprises are moving forward, forging ahead, and the soft outfit exhibition provides effective empowerment, and naturally has formed a win -win situation.