Great Wall News (Reporter Xin He Ning Xunwen Yan Liu Fei) In Jihua Three 50 Two Professional Occupation Co., Ltd., 27 production lines will produce 21,000 medical protection clothing in one day. From the intensive drums into production to ending a side -by -side battle with the medical staff, the life expectancy of one -time medical protection clothing is just a few days. However, those stories engraved on the production line are warm and long.

If the protective clothing has memories, she must remember that in the company’s production workshop, some people have firmly made a request to “I also want to participate in the production task”, and a request corresponds to a war book and a red handprint; Someone once received a phone call in the middle of the night more than once, and immediately rushed to the workshop to debug the equipment, just to ensure that the machine was often put into production the next day; some people were new to work, but they were always busy but not messy. , A happy smile on the face.

If the protective clothing has memories, she must remember that the machine of the machine 24 hours a day in the workshop; how many employees should not care about raising their heads, stretching their waist, and drinking saliva.

If the protective clothing has memory, she should remember many stories behind the production line …

Xue Jingrong, who was helping to help in the San Division, was busy sewing the film. Reporter Xun Wenyan Photo

“I want to come here for help, it doesn’t matter if you don’t give money”

On February 1st, Huang Hongtao, the leader of the three -point preparation group of Jihua Three Fifty -0 Two Professional Occupation Co., Ltd., issued an important notice in the work group: “All members will go to work tomorrow, not to be late, and have important task arrangements. “

“The team leader, do you have enough hands? I want to come over to help, it doesn’t matter if you don’t give money.” Xue Jingrong, who stared at the dynamics of the work group every few hours, saw the notice, and sent WeChat to Huang Hongtao as soon as possible.

Xue Jingrong was a employee of the San Division’s preparation group. After leaving the factory in 2018, he operated a restaurant with her husband. Although she was no longer at the Sanpan Factory, she still stayed in the work group at the time. She told reporters that after I heard that the third -point plant had to undertake the production task of medical protection service, she was always concerned about the work group dynamics, hoping to apply for returning to the factory to participate in protective clothing production.

On the first day of entering the factory to work, Xue Jingrong felt the arduous production task from the intense working atmosphere. After the consent of the leader, she called her sister Xue Jingli at night and invited her sister to enter the factory for help. Xue Jingli on the other side of the phone did not hesitate, and immediately promised to go to work the next day.

“I didn’t think too much at that time, so I wanted to do my best for the front -line medical staff.” Xue Jingli said, she is now with the employees of the preparation group. At 11 o’clock.

The first -branch factory took the initiative to apply for the production of protective clothing, and now it has entered the normal production track. Reporter Liu Fei Photo

“We can do it if the San Division can do it, apply for work”

On February 3rd, the San Plant took the lead in spreading the production line into production. On the same day, Yang Jinliang, the director of the first branch factory, received a call from Han Huijuan, the team leader of three groups: “Factory director, we can do it by the third branch factory, let’s apply quickly!”

“Everyone’s minds are the same, and we must bear it together at a critical moment.” Yang Jinliang told reporters that he received a dozen more than ten calls like this. Immediately, he applied to the leader to start construction. On February 4, the production line was paved. More than 600 employees of the 8 teams in the entire plant immediately put into production.

In fact, the production situation of the first branch and the third branch is very different. Yang Jinliang told reporters that before, a branch of the first branch mainly produced wool clothes. Most of the employees took the soldering iron in hand, and the sewing workers who did code and hot paintings. The protective service production required a car that was able to use the sewing machine. 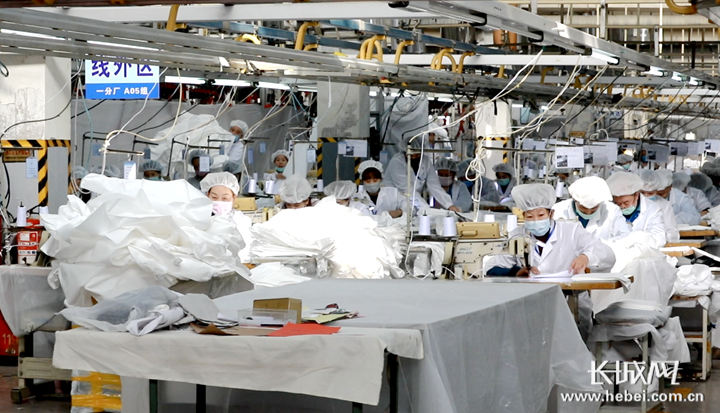 “Apply for construction, and the other end organizes the backbone employees to quickly learn the use of sewing machines and heat seals, and it will be clearly explored for half a day.” Yang Jinliang said that after two days, the entire factory entered the normal production track.

“It’s settled at home, I want to go to a key process”

“It’s settled at home, let me take a key process!” Considering that Song Yongli’s child was just 3 years old, Zhao Meifang, the leader of the 8 group of the two -point plant, wanted to arrange for her to participate in the sewing work with less work intensity, and Song Yongli But actively submitting the application requires a key process. 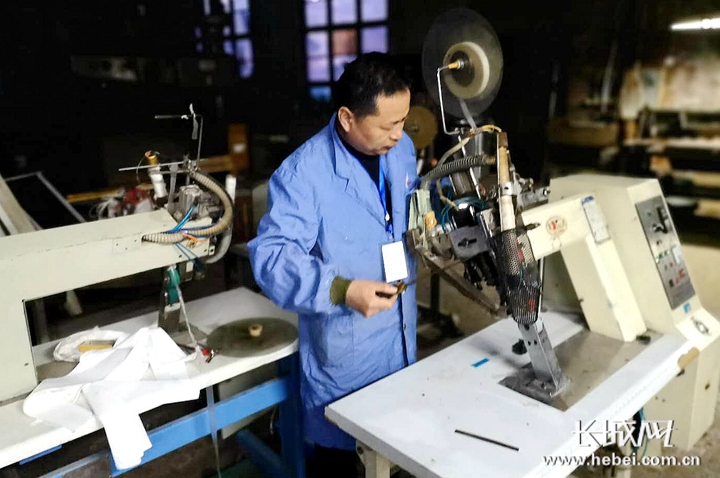 The hot -sealing strip is an important part of ensuring the sealing of the protective clothing, but the process is more complicated and the work intensity is large. Song Yongli, who had mainly participated in the production of shirts, did not contact the overheated sealing machine, and she started to learn from scratch. In just half a day, Song Yongli mastered the process of process -according to his own work rhythm, adjust the speed, pressure and temperature of the hot seal.

Song Yongli, who was proficient in the hot -sealing machine, took the initiative to apply again, requesting the hot sealing work in front and after the pants that were not easy to operate. At the same time, in addition to completing the volume of the staff, they also actively help other processes colleagues to complete the work.

“When I was at work in the morning, he hadn’t woke up yet. When I got off work at 11 o’clock in the evening, he had fallen asleep.” Speaking of the child, Song Yongli said that someone took care of it at home, and he did not care about it. God didn’t say a word to the child. 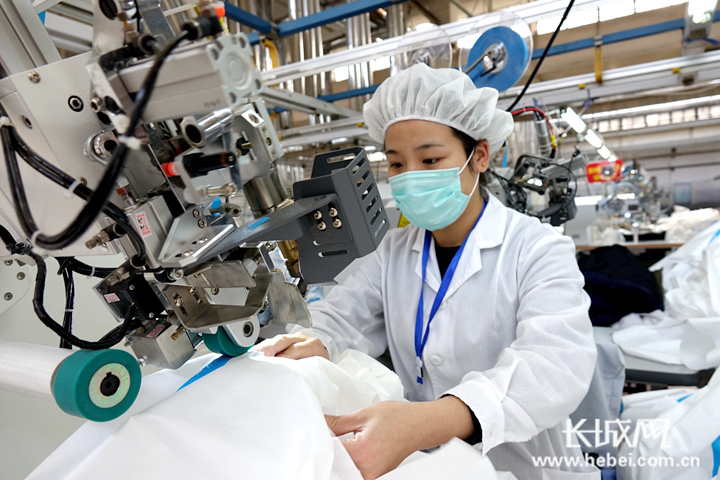 “During this time, I want to accompany my children the most”

Unlike Song Yongli’s situation, Zhang Yunjiao, a group of 3 groups of factory, is a single mother. Before coming to work in the factory every morning, she should put the steamed buns and pancakes on the living room table. The 7 -year -old son wakes up You can eat it directly.

“At noon and at night, there was more than an hour of rest, so I hurried home and went home to make meals for my children, and came back to work.” Zhang Yunjiao said that there was no time to come to a lunch break, and I could only let my friends give me a meal.

In addition to the short time of eating, you can only stay alone at home. Zhang Yunjiao said that when his son was alone at home, in addition to watching TV, he was doing homework and painting, and sometimes he lay on the balcony and looked out, waiting for her to go home. “My son is timid, and every night I have to wait for me to go to bed after I come back from get off work.”

Although he always remembered in his heart, as one of the few employees who were proficient in using the heat -sealing machine, Zhang Yunjiao did not ask for a day off, and did not leave early for a day.

“In this special period, we have to do our best and not to drag the legs.” Zhang Yunjiao said, waiting for this period of time, she wanted to watch TV, do homework, and paint with her son.

In order to debut the equipment as soon as possible, the colleagues of Lu Mengkui and the Department of Equipment Security were often busy late at night. Lu Mengkui confessed

“You can eat hot rice as soon as you go back, can you be unhappy?” 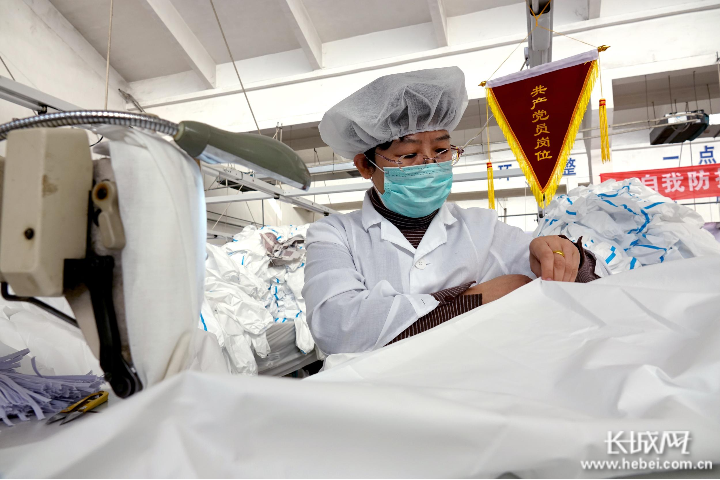 “Don’t let you come over? What do you do?” At 8 pm on February 12th, Lu Mengkui, who was still working overtime, received a lot of blame in his tone.

It turned out that after receiving the production task of protective clothing on January 29, Lu Mengkui began to work on the same day as the deputy minister of the equipment guarantee department. The lover and son were worried that he couldn’t care about eating alone. He called to see him many times and made him a few hot meals. He was rejected by him. On this day, the two sneaked in the next time to make a dinner for Lu Mengkui.

“You can eat hot rice as soon as you go back, can you be unhappy?” Different from the scene at the time, when Lu Mengkui told reporters about this story, he revealed happiness in his tone and expression.

To complete the production task, personnel and equipment are indispensable. Lu Mengkui introduced that, on the basis of the original equipment, in order to meet the demand for large quantities, the company borrowed more than 200 hot seals from the outside world. However, due to the different styles and the old and new. It can be put into use after maintenance and debugging. To this end, all employees of the Ministry of Equipment Security basically eat and live in employee dormitories. Each time a batch of equipment is received, the factory will be reported as soon as possible. In just one week, more than 200 hot seals were successively entered into the factory to meet the production needs of each branch. 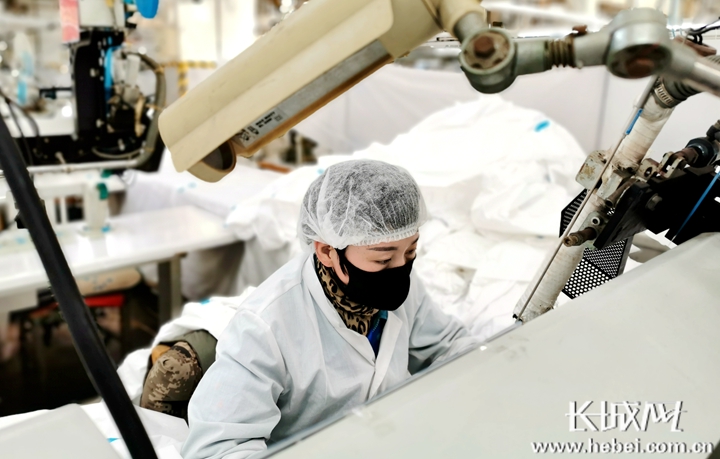 After the epidemic in the new coronary pneumonia, the daily output of Jiji 350 and Twenty -two professional clothing reached 21,000 companies to undertake the production tasks of 400,000 sets of medical protective clothing. In order to complete the task as scheduled, the company quickly purchased nearly a hundred special equipment, recruiting and trained more than 1,000 employees, overtime and fighting for overtime, and the daily output of 21,000 on February 13.