Chongqing Specialty Legend (487) | Peng Shui Miao silver jewelry, which brings together the essence of the Miao culture, how can a “beauty” word?

If you let you talk about the Miao silver jewelry in your eyes, how would you describe it? Gorgeous, exquisite, solemn, magnificent, luxurious … and these words seem to only reflect its appearance, not inner heart. Do you want to understand it step by step? Let’s take a look together! 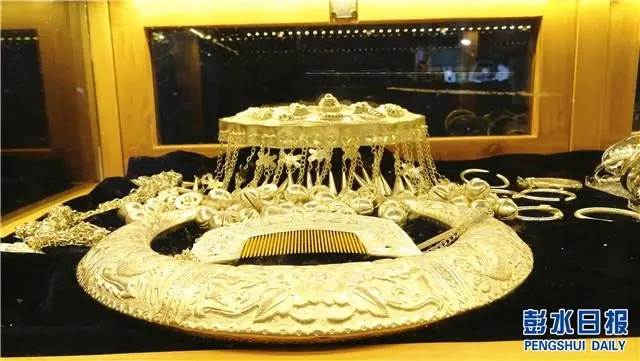 There are many types of Miao silver jewelry, from head to toe, everywhere. In addition to headwear, chest and neck jewelry, hand ornaments, clothing, dorsal, and waist pendants, there are also footwear in some places. They are carefully made of Miao silverrs. It is said that it has a history of thousands of years. Therefore, the art world of Miao silver jewelry is colorful and diverse. With its many varieties, Qimei shapes and exquisite craftsmanship, it shows its rich spiritual world.

In Peng Shui, Chongqing, we can also see the charm of Miao silver jewelry and its forging skills.

As early as the Spring and Autumn Period and the Warring States Period, Peng Shui had a highly technical bronze forging technology. Peng Shui ancestors made exquisite bronzes such as tiger buttons and clocks. The silverware made the same vein, incorporating the superb skills of bronze forging.

The Miao descendants of Peng Shui and soil are born. His silver jewelry forging skills gathered the essence of the Miao culture. Its flowers and birds patterns and other decorations, in the implication of Fulu Shouxi and auspiciousness, inject the unique cultural connotation of the Miao family. They are the representatives of Peng Shui’s thousands of years of metal handicraft production. Studies, culture, art, and the history of Peng Shui nationality have the role of living specimens.

The Miao silver jewelry production skills of the Clan family are also early. About the early years of the Qing Dynasty, the ancestors of the Puppet Shi moved to Jiaocun Village to settle and reproduce. During the Tongzhi period of the Qing Dynasty, the family business of the Clan family was prosperous, and women’s demand for silver jewelry was increasing. In the adults of Jinguang, he took over the family workshop, purchased silver, forged bracelets, clothing, and children’s hat jewelry.

In the generation of Jun Junzhang, he said that he grew up in the sound of the elders who made silver jewelry. At the age of 8, he began to learn silver jewelry processing. He produced the first work at the age of 12. With the encouragement of his father, he was determined to learn this craftsmanship. In 2011, Jun Junzhang set up a silver jewelry workshop to use his ancestral skills to make Miaojia jewelry and living utensils.

But Jun Junzheng was not satisfied with this, and he was constantly learning. Peng Shui is the only minority autonomous county in Chongqing. However, the style of the Miao silver jewelry is not static, and people have different aesthetic concepts in different periods, and silver jewelry forging is also different. In this regard, in the process of making silver jewelry, as long as he heard that there are old silverrs with good craftsmanship, he will come to ask for advice. His learning footprint has traveled throughout Yunnan, Guizhou, Hunan, Guangxi and other places. At the same time, on the bookshelf of his workshop, there are many books on silver jewelry production. In the free time, he learned by books and online.

“Good silver artists are not necessarily good teachers. Many old silverrs are good at forging production, but they are not good at teaching apprentices, so my learning process is very difficult.” 庹 Junjun said that learning in other places is particularly difficult to learn in other places. , I have suffered a lot of injuries. He was often scalded by silver and was scalded with rosin carving. He had injured the tendon of the copper strip. During that time, he even needed others to help even eat and take things.

Although he has experienced so many difficulties, he has never regretted it. Instead, these difficulties made him cherish every work of himself.

The carving technology is the essence of making Miao silver jewelry. If you want to make exquisite silver jewelry, you must first practice hard work. On weekdays, as long as there is time, Jun Junye always lie on the copper plate of the box plate to practice carving, and often takes several hours. In the workshop of Jun Junyu, in addition to seeing the common silver jewelry of the Miao people, there are silver appliances, including tableware, liquor, etc. 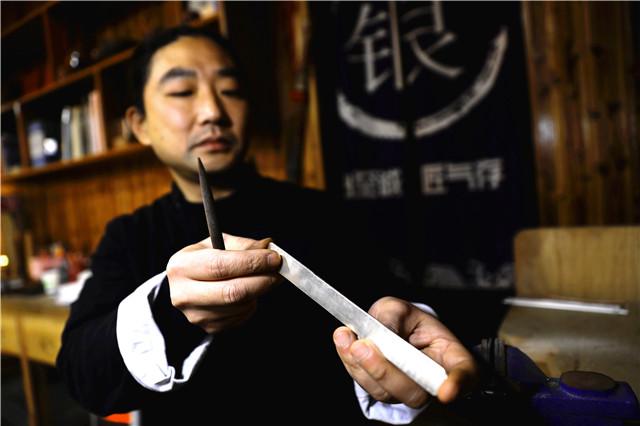 In addition to the molds circulated on the ancestors, Jun Junye also made a lot, and now there are more than 50 molds.模 Junjun said that it is necessary to draw a picture first, then carve, and finally use a homemade knife to repeatedly rinse the copper plate, and it will be modified repeatedly during the use process to excel. 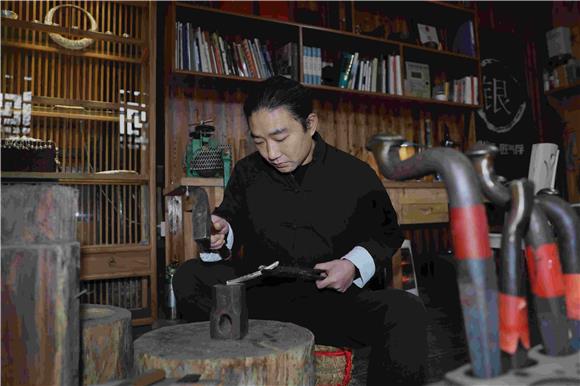 Among them, making headdings are the most complicated in these crafts. It takes half a year to make a headgear. “The process of making the silver jewelry is a process of tempering the body and mind.”

Look! Jun Junzheng touched a silver block into a silver bar. I saw the spitter spit out the red and blue flames. The silver film turned red instantly, the tweezers were clamped, and the quenching … The melting cast was burnt and the tinker knocked. A flower was opened on the silver film, and the veins were clearly visible.

Mold, Ivillery, Welding Tromaton … 庹 Junjun poured all his passion and life in every work. Melving silver, forging, drawing, polishing … Every step, Jun Junye is careful and detailed. Silver jewelry, silver appliances … a delicate jewelry is beautiful, conveying the spirituality and wisdom of the thousands of years of folk art.