The 2021 South Korea (Qingdao) Imported Commodity Expo (online platform) was successfully held from December 17th to 18th. The theme of this exhibition with the theme of “aggregate linkage and empowerment the future” is hosted by the Qingdao People’s Government, the Qingdao City People’s Government, the China International Trade Promotion Commission Qingdao Branch (Exhibition Office of the City Association), and the Qingdao Municipal Commercial Bureau. The aim of promoting the interoperability of China’s and Japan and South Korea markets, Chinese -Japanese and Korean companies can achieve face -to -face information docking here, help the digital economy accelerate the development of the digital economy, and share new opportunities for foreign trade development. 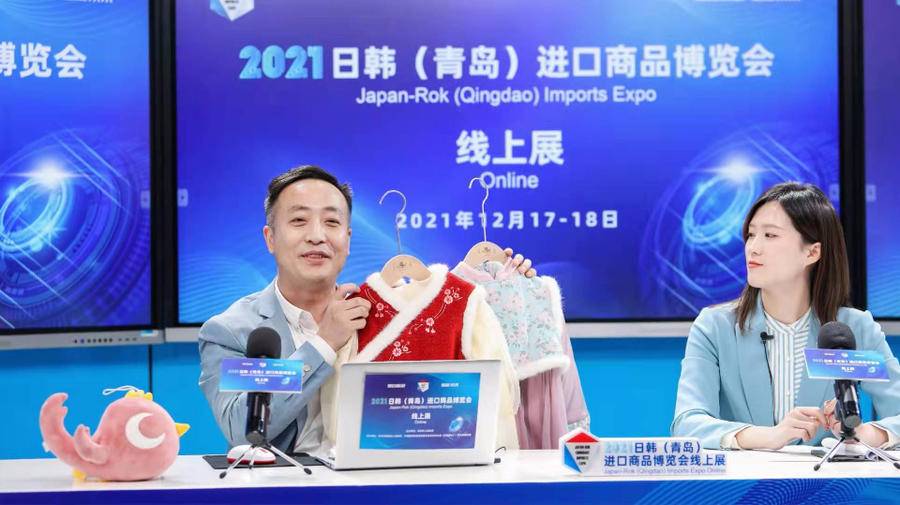 It is reported that the imported product expo at the South Korea (Qingdao) Imported Products on 2021 adopted the dual -line fusion model of online “exhibitions”+offline “purchase”, achieving a perfect combination of digital space and physical space. The online use of virtual VR technology on the venue is adopted. According to the real -life modeling of the venue, it creates the three major online theme exhibition areas of “Japan and South Korea, Japanese and Korean equipment companies, and cross -border e -commerce products”. (Qingdao) The new products, new technologies, and new achievements of the imported commodity expo provides an integrated immersive interactive experience for entering enterprises and online buyers.

According to statistics, during the exhibition, a total of 1,2298 professional audiences and buyers visited the platform, and launched online communication with 724 companies in the enterprise and negotiated and exchanged.

Qingdao Jiyu Clothing Co., Ltd., as a leading company in the children’s clothing industry in Qingdao, was invited to participate in this Expo. Chairman Liu Yunfeng said in an interview that participating in the Expo was a lot. The online Expo has broken the area restrictions on the scene. Through online empowerment for the enterprise, letting the enterprise break the barriers through such “linkage” and “empowerment” The effect may be unmatched by the exhibitions held at the scene.

Qingdao Jiyu Clothing Co., Ltd. was founded in 2010 and is a children’s clothing company that focuses on original design. Not only has its own strong R & D team, but in 2016, it has begun cooperation with the Korean design team to create a brand that belongs to its own. There are hundreds of original modeling markets every season. In addition to focusing on design, it is also a production enterprise with its own factories, so that the cost can be controlled and cost -effective. After more than 5 years of development, there are more than 400 specialty stores in Hebi, and their footprints have spread across the country. In May 2021, he was awarded the title of “Original Designer Brand” issued by the China Clothing Association; in July, he participated in the China International Children’s Fashion Week, and Wang Xiaohong, the chief designer of Herque, won the title of “Top Ten Children’s Fress Designers in China”; September Hechque has also appeared on the highest stage of the Chinese clothing industry -China International Fashion Week, which has been released in 2022 spring and summer products.

In this Expo, Qingdao Jiyu Clothing Co., Ltd. specially brought several new year outfits of He Skin. In order to highlight the characteristics of the New Year’s festiveness, these New Year’s outfits are specially adopted by the festive colors such as red and pink, and the traditional Chinese traditional elements are combined in it, which can well reflect the traditional culture. China, Japan, and South Korea are similar, and their customs are similar. These traditional Chinese -style clothing is not only loved by children in the domestic market, but also welcomed by children in Japan and South Korea. “Yuyu Hetian, Yueyue Park” is the meaning of the Herque brand. “Representing Chinese children’s clothing to the world” is the vision of Qingdao Jiyu Clothing Co., Ltd. “I hope that through the platform of this Expo, the sparrows can officially go abroad and go to the world. I hope that when everyone goes to Seoul or Tokyo in the future, I can see more and more sparrow stores in the local area. While brought a good childhood memories to domestic children, they can also spread this kind of good memories of childhood to the world. “Liu Yunfeng was confident in the future prospects of the company’s development.