Germany Customs seizure US 3M mask and protective clothing: Products should be exported to the United States and Switzerland

According to the “Rhine Post” local time, the German Customs recently confiscated the US 3M Group in the Jüchen European Distribution Center, including medical, laboratory, and chemical production. Masks and protective clothing, as well as civilian masks, and suspect that this batch of goods is used to illegally export.

The German Federal Customs Department and 3M Group have confirmed this collection operation. A spokesman in the German Krefeld Customs Office said: “Customs personnel inspect the export goods in the 3M group factory in line with the legal provisions. All all matters must comply with the tax confidentiality. The female spokesperson of the 3M Group said:” Today, the Customs of Menxinladbach examines a batch of goods registered to Switzerland in our European Delivery Center in Jüchen. “The spokesperson said that according to the customs department, this examination is related to the current medical protection equipment export restrictions in Germany.

Safety departments have confirmed the Rhine Post, and the Customs confiscated and sealed several batches of protective supplies during the inspection. These products should be exported to Switzerland and the United States. Signal sources said, “I found a few truck goods intended to illegally export.”

Due to the new crown pneumonia epidemic crisis, it is currently only allowed to export medical equipment from the EU. According to the federal government, the protective equipment can only be exported if the major demand in Germany is satisfied. Even if other countries lack protective equipment, it will endanger human life. This is still applicable. 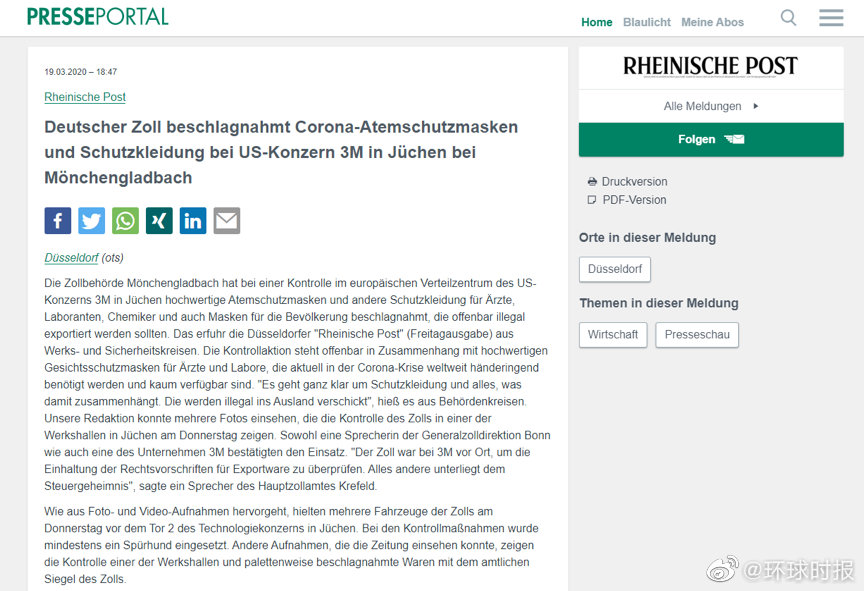